Total votes: 1
100
100
Games / Strategy games
Why do you have to download World War Doh: Real Time PvP 1.0.26?
World War Doh: Real Time PvP for Android is a cool multiplayer strategy, where players have to create their own army and go to conquer the world. Try to collect the most powerful deck of heroes, constantly improve their skills and take first place in the ranking table. Battle against players from all over the world, attacking their fortresses and army. Constantly change tactics to avoid being predictable and get your share of positive emotions from card battles and constant competition.

Graphic content is made in a funny drawn stylization. The image turned out to be very funny and will be able to lift your spirits every time you launch the application. The gameplay consists of participating in numerous battles. Try to be the strongest and try your hand at battles against players from all over the world. Spend time in this interesting toy, collecting the perfect deck and conquering the whole world. 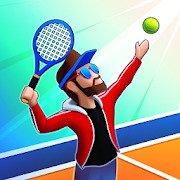